Types of Ties (Including Pictures)

Tethered Oral Tissues (TOTs): This is an acronym adopted by many practitioners as an umbrella term for lip, tongue, and buccal-ties.

An individual can possess multiple ties from 3 locations including the tongue, lip, and cheek.

The term you will see often is ankyloglossia. Ankylo means (stiff, fused, fixed), and glossia means (tongue).  Ankyloglossia is also known as tongue tie, which is a congenital (born with it) oral anomaly that may decrease the mobility of the tongue and is caused by an unusually short, thick lingual frenulum, a membrane connecting the underside of the tongue to the floor of the mouth.

Frenulum: A small frenum. The terms “frenum” and “frenulum” are often interchanged.

Frenum: This is the general term given to any fold, band of tissue, or mucus membrane in the body that attaches or anchors to a semi-mobile organ in the body. The connective tissue holds oral soft tissue in place against the jaw and skull bones. These tissues are created during fetal development, and in most cases, the growing baby’s frenum gradually reduces in size, a process known as apoptosis allowing for necessary mouth movement prior to birth. However, some infants are born with these tissues enlarged, hardened, or immobile. Which may lead to the removal of some frenum tissue. You may see the word written as either frenum or frenulum. Both are technically correct, which can be a little confusing. However, the plural form is likely to be more confusing, since there are three acceptable plural forms: frenulums, frenula, and frena. All of these varied spellings and plural forms refer to the same tissue.

Like the tissue itself, the procedure to reduce the connective tissues and allow for freer movement of the lips, tongue, and mouth is known by many names. You may see frenectomy, frenotomy, or frenulectomy used interchangeably. All three refer to procedures that release the soft tissue from the harder bone tissues. This can be performed using a number of different techniques, but most often, dentists or oral surgeons will perform a frenectomy using surgical scissors, lasers, or a combination of the two.

TONGUE, LIP & BUCCAL (CHEEK) TIES – WHAT ARE THEY?

An oral tie is a condition that refers to restricted movement of either the lip, tongue, or cheeks due to a short, thick, or tight frenulum. While we all have frenulums, they are only considered “tied” when movement or function is prevented or impaired.

Tongue Ties: Also known as ankyloglossia, or lingual ties. Medically known as Ankyloglossia, a tongue tie is identified when the tongue’s movement and function are restricted due to a tight, short, or thick lingual frenulum. A list of symptoms also needs to be present in order to make the diagnosis. When the soft tissue (frenum) connecting the lips, tongue, or cheeks to the hard tissues of the mouth is too short, hard, or inflexible. When this occurs, ordinary movement while chewing, speaking, smiling, and performing other routine tasks is impeded. Tongue tie may also specifically refer to concerns directly related to the connective tissue between the tongue and the bottom of the mouth.

When the lingual frenulum is normal, it doesn’t hinder the full movements of the tongue; side to side, up, down, and out. This means that there are no issues with children sucking, eating, swallowing, and speaking.

But when there are tongue ties present, they can negatively affect a baby’s ability to latch, suck, feed, and swallow. (Older children may also have difficulties with eating, chewing, nasal breathing, speech, and dental alignment).

While the term “tongue and lip tie” is beginning to become more common, there are still many components that are misunderstood. One such example is identification.

Dr. Larry Kotlow, a pediatric dentist and one of the leading experts in Tethered Oral Tissues (TOT’s), has devised a classification system based on the location of where a tie attaches, that many (but not all) TOTs experts use. However, this is not a classification of severity, but location only.

Anterior Tongue Ties: This type of tongue-tie is very much visible and most commonly detected. These visible flaps of tissue attach to the tip, middle, or base of the tongue to the floor of the mouth.

● It is either at the tip of the tongue (Class 1) (sometimes resulting in a heart-shaped tongue tip) or, just behind the tip of the tongue (Class 2).
● Class 1 ties are usually the only ones that some medical professionals consider a “real” tie, leading to many parents’ concerns being dismissed. However, some leading experts feel that every anterior tie also has a posterior component to it as well.

Posterior Tongue Ties: This type of restriction is under the tongue and not as easily identified. These are “hidden” ties, generally beneath the mucous membrane, and need to be felt in order to be diagnosed. Sometimes a child is observed as having a “short tongue” when in actuality there is a posterior tongue tie.

● Here the membrane is less visible (Class 3), or hidden completely (Class 4).
● It is under the tongue and in the case with Class 4s, needs to be gently pushed down at the base and sides to be seen.
● Unless a health professional has specific training in tie identification, posterior tongue ties are most often missed.

Functional Classification of Ankyloglossia based on Tongue Range of Motion Ratio (TRMR) by Dr. Soroush Zaghi 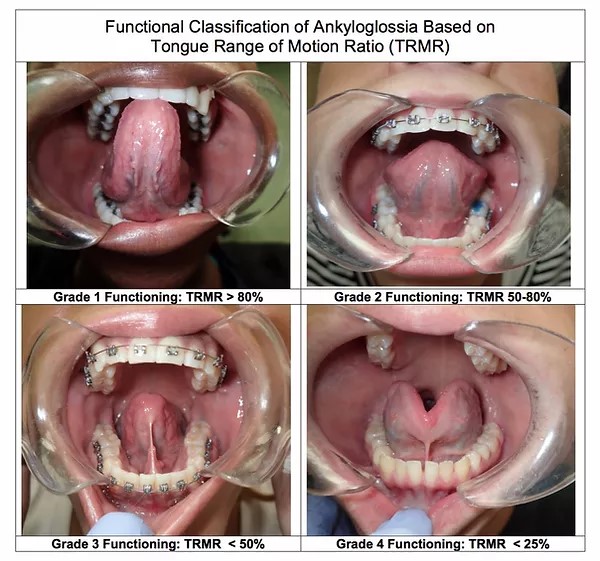 Lip Ties: Like tongue-tie, lip-tie is often used to refer to any of a group of soft tissue connectivity issues. However, this term can also speak specifically to concern with the tissue connecting the upper or lower lip to the mouth being too tight or otherwise intrusive.

This is when the lip (labial) frenulum is restricted or tight. Referred to as; upper labial tie (ULT), maxillary (upper) or mandibular (lower jaw bone), or a combination of the terms.
We get a diagnosis of a lip tie when the labial frenulum attaches under the top lip to somewhere on the gums near the front teeth, causing restriction and tightness, along with an array of symptoms to both mother and child.
While many children have prominent labial frenulums, not all are considered restricted. This is why it takes an expert to assess how tight the restriction is, location of attachment in a combination of symptoms noted by parents.
Similar to tongue ties – some professionals use a lip tie classification system. Again, this does not define the severity of the lip tie, but rather where the frenulum attaches to the lip.
● Class 1 – This type of lip tie is very rare and has little to no visible attachment.
● Class 2 – The attachment occurs somewhere on the gum line but above the edge of the gum line.
● Class 3 – The tie attaches to the edge of the gum line in line with a structure called the anterior papilla
● Class 4 – This type of tongue tie wraps right around to the hard palate.
Many parents will be confused as to whether or not their child has an actual lip tie and not just a normal upper labial frenulum. For further reading, this is a wonderful article from Dr. Bobby Ghaheri, an ENT and another leading expert on ties, that talks in-depth about the difference; The Difference Between a Lip Tie and a Normal Labial Frenulum. 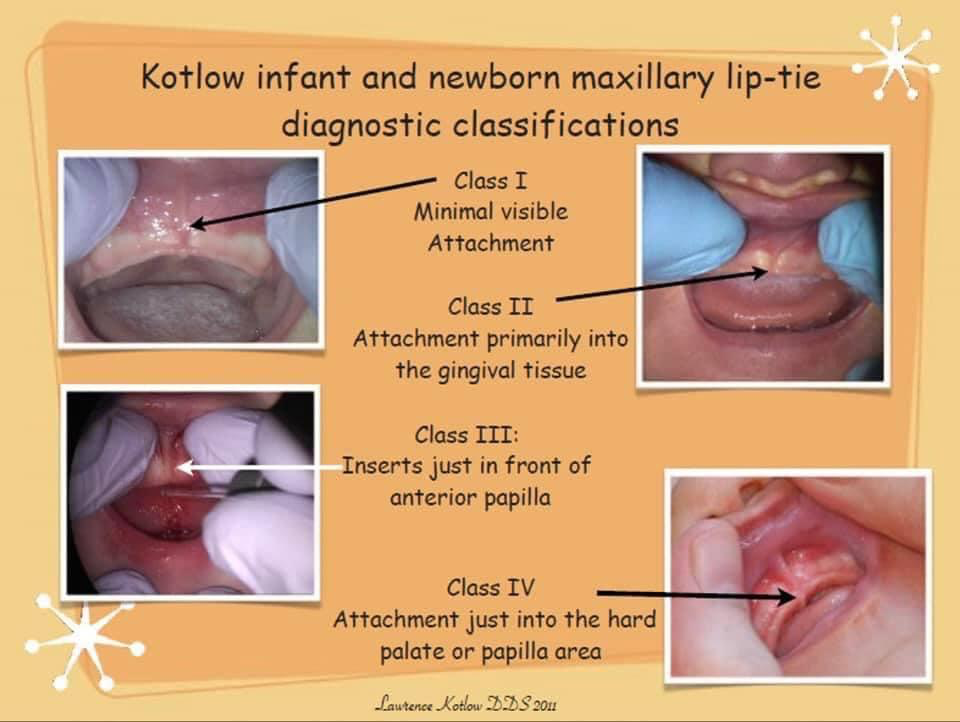 Buccal (Cheek) Ties: These are often called buccal ties. Buccal or cheek ties are the least known of all the restrictions. This is when a small piece of tissue is attached from the inner cheeks to the gums. Used less often, this term describes the condition of too tight, short, hard, or inflexible connective tissue on the sides of the mouth connecting the cheeks to skull bones and jaw.

They can be located anywhere from the way in the back beside where the molars will eventually erupt, to closer to the front of the mouth. To identify these, a practitioner may have to gently hook their finger into the side of the mouth and lift up and outwards.
They don’t seem to cause as much trouble, however, they are the least known of all TOTs, and therefore, the least studied.

What Is A Buccal Tie? (Including Pictures) 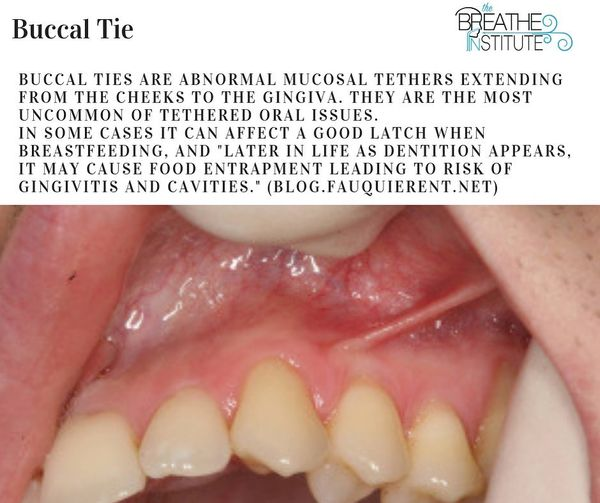 A Release: frenum tissue tension is removed most often with surgical scissors or laser.  The ongoing function will determine if one release is enough or if over time or with maturation-growth one may need another.

A Revision: can be done to treat reattachment that has occurred where the once-gained function is lost.  A revision can also be planned as a second-stage surgical approach to an initial release where its known further function and range of motion of the tongue can be gained, but certain roadblocks are in the way.  These roadblocks might include the patient’s age where further growth is expected but the child is too young to be fully compliant with post-operative therapy exercises yet immediate function can be gained which may be life-saving; the patient could benefit from immediate myofunctional, articulation, or feeding therapy but will not have enough room in the palate (roof of the mouth) to properly rest the tongue but with increased age will be undergoing orthodontic palate expansion and further release of the frenum will aid in full positioning of the tongue in the palate; or there may be low tongue-tone which is gained with therapy, yet further restriction is needed to be released to aid in an increased range of motion, strength, and function of the tongue.

The Buteyko Breathing Technique: (pronounced Boo-tay-ko) was developed by Ukrainian doctor Konstantin Buteyko. While studying medicine at the First Moscow Institute of Medicine. Dr. Buteyko observed a relationship between breathing and a person’s state of health. As a person’s health deteriorated, their breathing became faster, more upper chest, and was often through the mouth. Buteyko wondered whether it was the increased sickness that changed breathing patterns or whether it was the change to breathing patterns that contributed to sickness. With the theory available at the time, he studied the role of carbon dioxide in the human body.

The Bohr Effect was discovered in 1904. Stated that the pressure of carbon dioxide in the blood influenced the release of oxygen from the blood to the cells. Based on this, Dr. Buteyko began teaching his patients. To breathe through their nose and to deliberately slow down their breathing to create a feeling of air hunger. With many of his patients experiencing improvements to their health. The ‘voluntary elimination of deep breathing method’ was born. When his work arrived in the West, the name was changed to the Buteyko Method. In the early 1980s, Buteyko breathing received the approval of its widespread use in Russia from the State Medical System. Konstantin Buteyko passed away on the 2nd of May 2003 aged 80 years.

Disclaimer: This information is not intended to substitute or replace the professional medical advice you receive from your physician or specialist. The content provided on this website is for informational purposes only, and was not designed to diagnose or treat a health problem or disease. Please consult your physician or specialist with any questions or concerns you may have regarding a medical condition. Tongue Tie Life does not offer any medical advice, nor does it endorse any particular medical provider. Tongue Tie Life is not responsible for the outcome of any medical treatment or surgery. It is the user’s responsibility to make a prudent decision on which medical provider to select or which medical procedures to follow.